Rechargeable batteries have various features depending on their type. At first, we introduce battery type.

Lithium-ion battery is used in a variety of applications, from small devices such as smartphones to those mounted on electric vehicles and aircraft. It features high energy density, small size and light weight with the same capacity.

Size AA and AAA dry cell rechargeable batteries such as "eneloop" and "Evolta" almost use nickel-metal-hydride batteries (some nickel-cadmium batteries remain). However, because the circuit to prevent overcharging differs depending on the product, a dedicated charger must be used to prevent liquid leakage and life deterioration.

The NAS (sodium-sulfur) battery uses natrium (or sodium, Na) for the negative electrode and sulfur (S) for the positive electrode. Ford Motor announced the principle in 1967, and NGK is the first storage battery in the world that has been commercialized. Fine ceramics are used for the electrolyte that separates the two electrodes. Unlike ordinary storage batteries, Na and S used in the electrodes are liquids, and the fine ceramic electrolyte is solid. 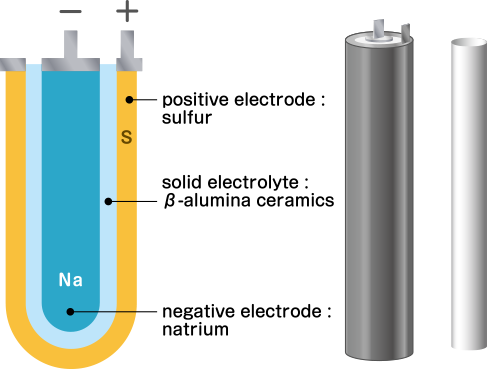 It is mainly attached to power plants that use natural energy such as solar power and wind power. It is used to adjust the amount of power supplied and to maintain the power quality.

Finally, it is a redox flow battery. NASA announced the basic principle in the 1970s, and redox is a coined word combining reduction and oxidation. Attach the electrode in the cell and place a diaphragm in the center that only hydrogen ions can pass through. Then, two different electrolytes from the external tank are circulated by pumps to the electrodes separated by the diaphragm to advance the redox reaction and charge/discharge. What has been put into practical use at present is the use of vanadium-based solutions for both electrolytes. As the pentavalent vanadium ion becomes tetravalent in the positive electrode and the divalent vanadium ion becomes trivalent in the negative electrode, electrons can be released from the negative electrode and transferred to the positive electrode.
During charging, a reverse reaction occurs. 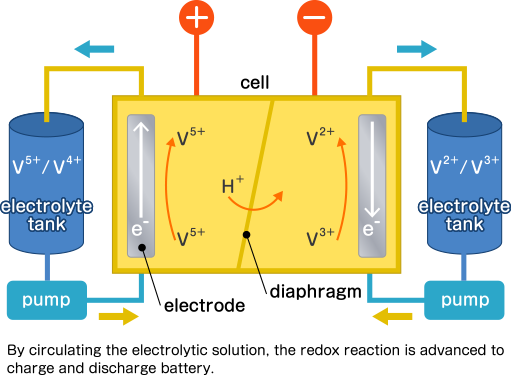 These are also attached to natural energy power plants like NAS batteries.

Different Features Depending on Storage Battery

Next, we introduce the features of each battery.

Lithium-ion batteries have an electromotive force of about 3.7 V, and have the advantage of achieving high voltage independently. The electromotive force depends on the type of lithium oxide used for the positive electrode. Main materials used the positive electrode are lithium cobaltate (LiCoO2), lithium manganate (LiMn2O4), lithium nickelate (LiNiO2), lithium iron phosphate (LiFePo4), and so on. Cobalt and manganese have a maximum voltage of 4.2 V. On the other hand, iron phosphates have a low voltage of around 3.6 V, but the charge/discharge cycle life is three to four times longer. Another advantage is that there is no memory effect.

However, there is a disadvantage because it uses Li with extremely high reactivity. Safety measures are important as with the NAS battery described later.
There are three types of lithium-ion batteries: cylindrical, square, and laminate types. The cylindrical type causes a great deal of damage to the surroundings when it ruptures because the internal pressure of the gas generated by charge/discharge cycles is difficult to escape. Compared to that, the square type expands easily, making it easier to release the internal pressure. Although it is the laminate type that is the easiest to release pressure, it means that it is easy to swell. Should it become swollen, you should stop using it further.

Constant Current/Constant Voltage control is used for charge. This is the same principle as quick charging of lead storage batteries described later. At first, charging with a fixed current (for example, current of 1 C), but when the voltage reaches 4.2 V, charging is changed with constant voltage. The current gradually decreases toward full charge.
However, lithium compounds are difficult to handle, and overcharging can cause serious accidents. Therefore, protection functions such as stopping charging when the cell voltage is 4.30 ±0.05 V or more are required.

Nickel-metal hydride batteries have an electromotive force of 1.2 V, which is almost the same as nickel-cadmium batteries. Their environmental impact is low since they do not use cadmium. By using a hydrogen storage alloy for the negative electrode, hydrogen can be efficiently taken in and out, so the energy density is higher than NiCd despite the same voltage. The convenience that can be purchased at a convenience store is also an advantage of NiMH.

On the other hand, the memory effect is the disadvantage. Therefore, it is necessary to be careful about charge/discharge, and if adding and repeating charge is repeated, the voltage drop will occur, and there is a high possibility that the voltage necessary to operate the device cannot be maintained.

Constant Current control is used for charge. The battery voltage rises toward the full charge, but the voltage drops when it is overcharged. Since it is necessary to stop charging this point, perform - ΔV control on the control circuit. Absolute temperature control (dT/dt control) to detect temperature rise may be used together. This is also for NiCd.

Lead storage battery can obtain relatively high voltage with an electromotive force of about 2.24 V. We cannot use the applications where the number of charge/discharge cycles is large, but the advantage is that they can be easily obtained without memory effects. The commercially available 12 V battery is realized by connecting six storage batteries in series.

Being resistant to temperature changes is another advantage. In the case of automotive batteries, it is in the range of 80 degrees to -18 degrees to meet the discharge characteristic specifications.
In specific cases, -30 degrees are also available, but 25 degrees is recommended as the proper temperature. The reason is that when used in a low-temperature environment, the concentration of the electrolyte decreases as the discharge proceeds so that the electrolyte freezes and the discharge cannot be continued. Or does not reach that point, there is a problem that the amount of electricity that can be taken out is small.

Inside the NAS battery, the following reaction occurs at the time of discharge.

When sodium becomes a monovalent ion, it emits electrons, while sodium polysulfide is produced at the positive electrode. When charging, this is the reverse reaction.
NAS batteries have almost the same energy density as lithium-ion batteries and do not self-discharge. Another advantage is the ability to rapidly charge/discharge.
There is also a disadvantage. The largest one is the use of sodium with very high reactivity to the negative electrode, so there is a possibility of ignition. If there are holes or gaps even a little, they react with the water vapor in the air and generate heat. Therefore, when developing NAS batteries, it is necessary to conduct various safety performance confirmation tests such as external heating, submersion, dropping, and external short circuits.

The redox flow battery has a long charge/discharge cycle life of more than 10,000 times and has the advantage of being usable for over ten years. Electrolytes based on vanadium solutions are non-combustible, and battery operation is performed at room temperature. Therefore, there is no danger of ignition or explosion, and there is no need for heat resistance, so operation for more than 20 years is also possible.
Also, since the storage capacity is defined by the amount of electrolyte and the output is also defined by the size of the battery cell stack, it is possible to design these individually. This is also an advantage in designing and developing.
On the other hand, since miniaturization is impossible, it is limited to large facilities. This is also because the weight energy density is only about 25 to 35 Wh/kg and only half to 1/8 of the 80 to 200 Wh/kg of lithium-ion batteries. Unless the energy density can be increased by devising the electrolytic solution, miniaturization is difficult.

Matsusada's products can be used in all kinds of rechargeable battery and capacitor for development, evaluation and test.