We introduced how to make a DC power supply from grid connection and AC power supply until the last column. These conversions are basically done by circuits, and they are used electricity without waste, such as inverters for home appliances, and devices that efficiently operate solar and wind power. In addition, because it is also used to turn the motor efficiently from low speed to high speed, it is also used for the motor control part of the hybrid car. They are also incorporated in household appliances such as LED lighting otherwise. A semiconductor that controls and supplies power used for these circuits is called a "power semiconductor." They correspond from small electric power to large electric power depending on the place where they are used.

Recently, one power semiconductor that is under development is the "MOSFET (Metal-Oxide-Semiconductor Field-Effect Transistor)". MOSFET is used in places with low power, such as mobile phones and computer power supplies, and has a feature that the response speed is very fast. Furthermore, there is a device called "IGBT (Insulated Gate Bipolar Transistor)" that is used where high power is required.

Although "IGBT" has a slower response speed than "MOSFET", withstand voltage performance is higher. Therefore, it has the characteristic that the power loss when the switch is ON is small when a large current flows. This property is advantageous for use in home appliances, eco-friendly cars, electric cars, fuel-cell cars, and gas-electric hybrid cars, industrial machines, etc., so it is used in a wide range of products. 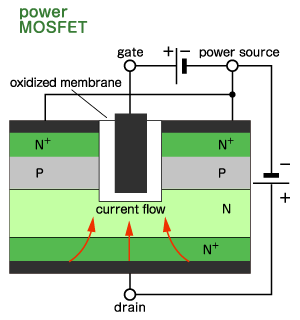 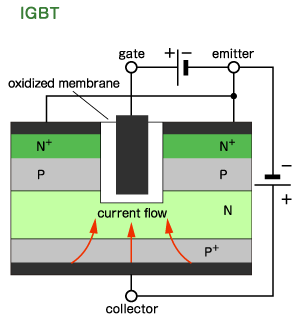 It is no exaggeration to say that the evolution of power semiconductors has supported the development of electric vehicles in particular. In fact, electric vehicles were first imported from the United States in 1917, and they were running in Japan. Although domestic electric vehicles were also being developed, they disappeared once after WW2. The reason is that "the driving distance is short despite being equipped with a large amount of storage battery" and "insufficient power compared to gasoline cars and diesel cars". The performance of the storage battery and the motor was low, too large, and heavy, so the mileage didn't increase. 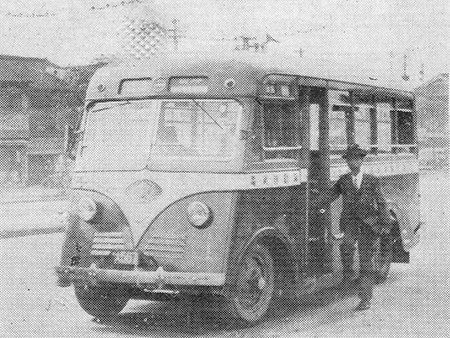 After that, with the oil shock that occurred in the 1970s, electric vehicles began to attract attention again. By this era, circuits were also miniaturized by replacing transistors, etc., and the performance of various parts had been improved. And the advancement of power semiconductors, including this transistor, is supporting the current electric vehicle.

In other words, it doesn't break even at high voltage, has low leakage current and lower On-state resistance can use high power and has a shorter switching time. Ideally, the switching time is 0 seconds, and the On-state resistance value and loss due to leakage current are 0W. However, there is a physical limit to achieving that, so it is the developer's desire to be as close as possible to this. And to evaluate these performances, of course, they will also be required on the side of the equipment under test. Detailed contents will be handed over to the next column; even if you develop a device that can perform high-speed switching, you cannot measure unless you have a test device that can evaluate it correctly.

In addition, other product performance requirements include that it can be used even at high temperatures and that it can provide stable performance when mass-produced. Since the usage environment varies depending on the final product. In extreme cases, it works at -50 °C, or it doesn't break even if it exceeds 150 °C. It is necessary to make a decision.

The yield is too bad if only one out of 100 satisfies the performance, and the price of the device will be higher. Of course, only a small number of products in the lot can withstand use in the extreme environment of space; for example, it cannot be repaired like a satellite. But even if the yield is bad to use under ordinary circumstances, there is a problem with the product design.

It is important to clear the reliability test, especially when installed in equipment that requires safety, such as automobiles, or in locations where stability is required, such as power stations and substations. Naturally, test equipment that can measure these reliabilities firmly is also an important factor in developing power semiconductors.