What is X-Ray Fluorescence?

When an object is irradiated with X-rays of a certain energy or greater, the inner shell electrons of the atoms in the material are excited. When the outer shell electrons move to the holes that occur as a result of this, X-rays equal to the difference in energy between the inner and outer shells are released. This is called X-ray fluorescence. 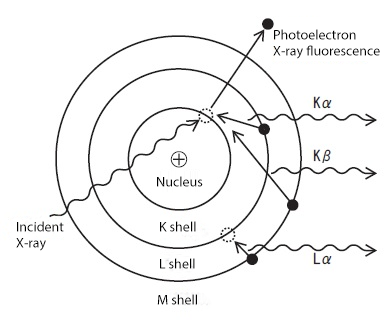 Since the energy of X-ray fluorescence is unique for each element, we can examine the fluorescence spectrum of a sample to analyze its constituent elements. (Figure 2) Also, by measuring the intensity of the spectrum, we can also determine the concentration of specific elements in a sample.

Quantitative analysis is a method of determining the content of elements in a sample. For X-ray fluorescence analysis, this method is broadly divided into two categories: the calibration curve method and the fundamental parameter (FP) method.

Calibration curve method: This is a general method for determining the concentration of a substance in an unknown sample by comparing the unknown to a set of standard samples of known concentration.

FP method: This method is used to devise a theoretical estimate of the composition of a sample based on the intensity of X-ray fluorescence from an unknown sample that is measured, based on the principle of the generation of X-ray fluorescence. The FP method is used to measure samples that do not have a calibration curve or whose composition is unknown.

Although X-ray fluorescence analysis allows a variety of samples, such as solids, liquids, and powders, to be analyzed non-destructively, there is a possibility that the analysis results may differ depending on the shape of the sample or how the sample is placed in the container. (Figure 3) Therefore, the following points are important when preparing samples.

* Revisions may be made to the legal interpretations of these regulations. The statements here do not represent the positions of official institutions. Be sure to refer to the original text of applicable laws and regulations.

The RoHS (Restriction of Hazardous Substances) was issued by the EU in 2003, and came into force in July 2006. Therefore, in order to ship products to EU member countries, the content of six types of hazardous substances specified in RoHS must be less than the specified values. (Table 1)

X-ray fluorescence analyzers (XRF) are non-destructive and can perform measurements very quickly, which makes them useful for screening hazardous substances. In addition, XRF can be used to perform both qualitative and quantitative analyses. Hexavalent chromium is detected as total chromium, and PBB/PBDE are analyzed as total bromine.

The Soil Contamination Countermeasures Act came into effect in February 2003 in order to prevent damage to health due to soil contamination and to gain a better understanding of contamination conditions. Among the specific hazardous substances that are specified in this law, the components of Class 2 heavy metals can be analyzed with X-ray fluorescence.

The specified substances and their reference values are shown in Table 2. An official quantification method is enacted only for total arsenic and total lead (JIS K 0470).

Toy safety is regulated by Part 3 of the EU Toy Safety Directive (EN71 Part 3). It stipulates regulations regarding the oral intake of heavy metals in toys that are designed for children aged 6 or younger, and that could be placed in the mouth or swallowed. The target metal elements and their regulation values are shown in Table 3.

These ST standards include the Food Sanitation Act, EN71, and other regulations as inspection items.

Halogen compounds have been used widely in electronic materials and other products as fire retardant materials. However, because they generate harmful gas when burned (dioxin in particular can be produced at high temperature) and for environmental concerns such as preventing the destruction of the ozone layer, there is now a strong need to switch to halogen-free materials. However, there is no clear definition of "halogen-free".

This standard has also been adopted for IEC standard 61249-2-21 (International Electrotechnical Commission) and IPC standard 4101B (Association Connecting Electronics Industries).

Table4 Total amount of chlorine and bromine in the JPCA standard

The X-ray generator unit (X-Ray sources, X-ray modules) consists of an X-ray tube and a high-voltage power supply, making it easy and safe to generate X-rays.