Last time, we explained how X-ray CT works. This time, let's introduce how to save the captured data and how to utilize the data.

For example, the JPEG format, which is often used in digital cameras, and the RAW format, which is a little closer to raw data. There are TIFF formats that are often used to save monochrome images. In addition, the DICOM format is the mainstream medical image format. An X-ray CT image is a stack of these tomographic images (called a stack image).

DICOM is a standard jointly developed by the American College of Radiology (ACR) and the National Electrical Manufacturers Association (NEMA) with the aim of standardizing both image formats and communication protocols in the medical field. Standardization began in the 1980s, and after passing through the ACR-NEMA standard V1 in 1983, the first edition of DICOM was released in 1998. Since then, this standard has become the de facto standard for medical devices around the world, especially X-ray CT devices and systems that display and utilize their images. In other words, if the medical device is compatible with DICOM, data can be exchanged with each other even if the manufacturers are different. Standardization work is still ongoing, and many medical device manufacturers are developing products that support DICOM.

DICOM format mainly stores information related to the date and time of shooting in text, patient's name, ID, birthday, etc. as a header, and then image format information and image pixel data are stored. Since this format is common, data can be exchanged correctly.

For DICOM format images, RAW format and JPEG format are commonly used. If you keep all the original information, the file size will be large, but save it in RAW format. On the other hand, if there is no problem if it can be confirmed as an image, it seems that JPEG format is used. This is the same as the idea of saving files in a digital camera.

In the case of JPEG, you can also select "JPEG Lossless, Nonhierarchical, First-Order Prediction", which is a lossless compression encoding. However, please note that this format may not be readable by general software.

The X-ray CT image obtained in this way can be created in high definition by reducing the focus of the X-ray light source. As a result, fine CT images can be obtained, and the processing time can be shortened by improving the computing power of the processing equipment, and the number of scenes that are used and applied is increasing.

For example, by arranging the obtained images in the scanned time series, you will be able to watch the changes in the tomographic plane of the sample as a movie. This makes it easier to find problems with the sample (such as a tumor in the case of the human body) that cannot be found with a single image. In this case, cross-section video and 3D video can be output in AVI format. Of course, it is also possible to convert to a file format that can be used on the Web such as MP4.

An application of this technology is reverse engineering, which confirms the three-dimensional structure based on X-ray CT images. In this case, you can create a pseudo-three-dimensional model by arranging a series of cross-sectional images vertically in space instead of making them into a movie (arranging them in chronological order). Simply put, it can be converted into 3D data such as CAD. This means that you can also measure dimensions, volume, and density. Especially for dimensional measurement, it is necessary to evaluate the measurement error, and we have succeeded in reducing this to about several µm by the efforts of each manufacturer.

If you compare the finished product with the design drawing, you will be able to compare how accurate it was. In other words, if you can find the part that is not accurate by comparing it with the design data, you can use it to improve the manufacturing process. 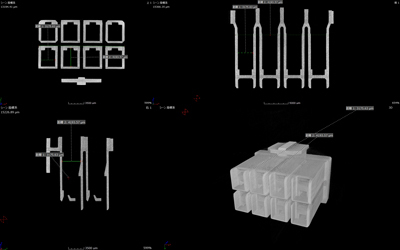 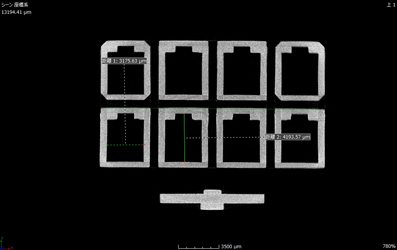 Volume Graphics Co., Ltd.'s "VG STUDIO MAX" has become the de facto standard as 3D display software that handles these transparently shot images, reconstructed images, and a collection of multiple images. It has many functions for reconstructing 3D shapes, so it can be said that it is ideal for reverse engineering.

Next, being able to see through the inside and perform non-destructive inspection means that you can inspect what you have created without destroying it. For example, in the FRP industry, it has been practiced to "make a shape" and then "destroy and evaluate". In particular, the only way to analyze the orientation of fibers was to perform a fracture inspection, but by using X-ray CT, it has become possible to evaluate without fracture. 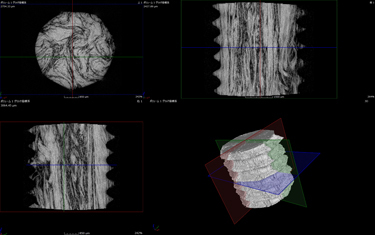 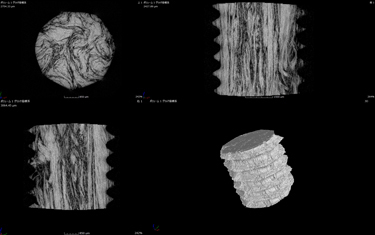 In addition, being able to convert to CAD data in 3D means that it is also possible to output with a 3D printer. The most popular CAD data used in 3D printers is the STL format developed by 3D System in the United States, which is one of the file formats for storing 3D shape data. The STL format is an abbreviation for Standard Triangulated Language, and overseas, it is called Stereolithography, which is the origin of the name. The feature is that the 3D shape is saved as mesh data.

Most major 3D CAD software on the market is equipped with export (output) to STL format as standard, so it is not so difficult to support 3D printers. Of course, in order to construct a three-dimensional shape from an X-ray CT image, it is necessary to take a picture so that the surface shape is smooth. In other words, the original shooting data must be low noise.

How are these files used? We mentioned earlier that it is used in reverse engineering. Other examples of utilization include comparison with blueprints, as well as the ability to create 3D models of parts without blueprints. If you set the moving parts in the 3D model created in this way, you can perform motion simulation on the computer.

On the other hand, it is also being used in the medical field. By creating STL format 3D data from a patient's CT image and outputting it with a 3D printer, the patient's organ can be reproduced as a full-scale model. This is used to see in advance what steps to take when performing difficult surgery.

Of course, there are other ways to use it. It can be used as medical education teaching material when conducting training for internships. Since it is possible to visualize the structure and function of the human body and the pathological condition, it can also be used for enlightenment activities for the people.

Informed consent will be easier to give to patients undergoing surgery by showing them a full-scale model in advance. Rather than explaining only the surgical procedure verbally, it will be possible to show the model and provide accurate and easy-to-understand information on what procedure and where to cure.

If the 3D printer is difficult to use, you can also use it as VR (Virtual Reality) content. There is also a service that converts DICOM data into 3D data into OBJ format for use in VR. By utilizing this, it is possible to perform surgical simulation using VR, and it is also possible to enter the inside of a greatly enlarged human body in a state where you are small and see the state of each organ. In addition to the human body, it is also possible to convert the internal structure of industrial products into VR.

In this way, the format of X-ray CT images have become common, and while connecting with newly born technologies, we are creating ways to utilize them that were unthinkable before.

The new design of the slim microfocus X-ray NDT system can be used to inspect any sample.
CT option available