We explain the principle of X-ray CT, and we also provide the difference between medical and industrial use.
"CT" is an abbreviation for "Computed Tomography." That is a method of "knowing the material and internal structure by irradiating an object with some kind of light (or radiation) to detect the transmitted radiation following that."
Accordingly, "X-ray CT" is a CT that uses X-rays as a light source. Any object can be a sample object that can transmit X-rays. One of the most easily imagined is X-ray CT for the human body for medical purposes. While this is the same idea as radiography, in terms of medical CT, a contrast medium is injected through the blood vessels in order to take images of vessels or certain tissues.

In this case, when emitted from the X-ray generator (X-ray tube) and passing through the human body, the X-rays are obstructed by the contrast dye. As a result, the X-ray detector (image tube) shows a lower X-ray dose than other parts.
Therefore, the density of the image, which is based on the X-ray intensity detected by the X-ray detector, indicates the location of tissues, including blood vessels.
X-ray CT effectively inspects things that cannot be disassembled or destroyed when inspecting the interior. It is a kind of so-called "non-destructive inspection." As of the inspection, there is a big difference in usage between medical CT and industrial CT. For industrial use, an X-ray generator and an X-ray detector are fixed facing each other, and then, the sample object is placed on a rotatable stage so as to take 360-degree images.
The magnification can be changed by moving this rotatable stage closer to or away from the X-ray generator.
On the other hand, in the case of medical use, a human cannot be placed on a rotatable stage to rotate around, so an X-ray generator and an X-ray detector all together rotate around the person. 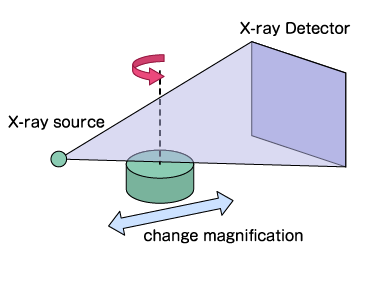 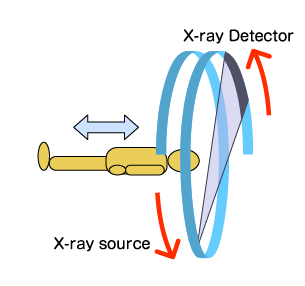 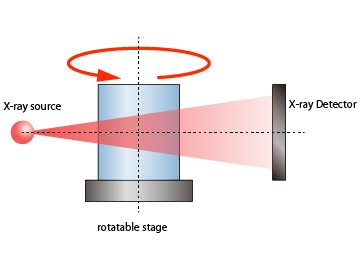 Though both seemingly have the similar features, the vertical irradiation type has the advantage where it can save more space than the horizontal one.
On the other hand, the horizontal irradiation type has the disadvantage of taking up more space than the vertical one, but it can deal with large or heavy samples. With the vertical irradiation type, it is difficult to fix such a heavy subject on a rotatable stage.
Following this, which type should be used depends on the size, weight, and shape of the sample. The resolution of X-ray CT has been improved by making use of microfocus X-rays since the 1990s. In the X-ray generator, the electron beam generated at the cathode is converged by a coil and lens, and then, X-rays are generated by hitting the anode.
The part where the electrons on the anode converge and hit to generate X-rays is called as X-ray focus. 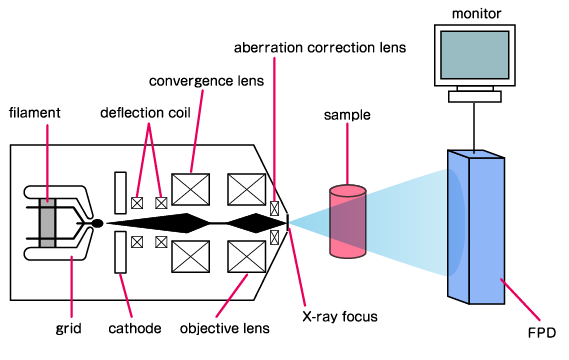 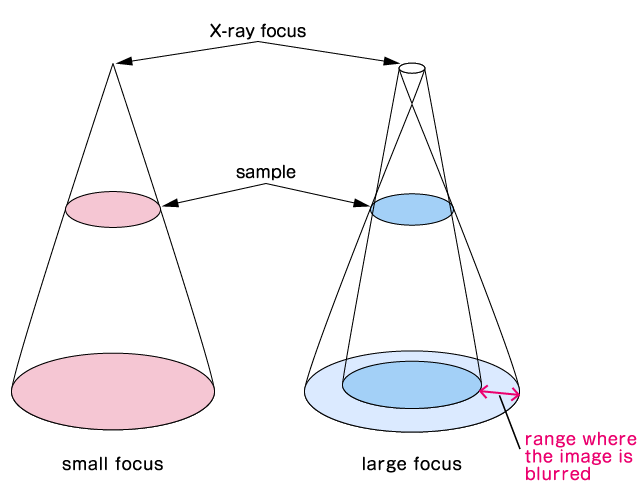 Decreasing the X-ray focal point also improves the resolution without increasing the magnification. Therefore, even when used as a mini focus X-ray, higher resolution can be obtained, and 3D images with higher resolution can be created as X-ray CT.
On the other hand, there are some problems with microfocus X-rays.
Reducing the X-ray focal point is synonymous with concentrating the electron beam in a narrow area. In this case, the temperature at one point of the anode may rise too much and cause damage. In order to prevent this, it is necessary to lower the X-ray dose.
Following this, however, the image becomes dark, and the required S/N ratio may not be achieved. Therefore, it is required to use it while considering the balance between resolution and S/N ratio.

Apart from that, there are important points as of X-ray CT operation. There are roughly eight factors that could cause errors in measurement.

The first is the temperature stability of the X-ray source followed by the resulting drift. As the fluctuation of output voltage was occurred by a change in ambient temperature, this is called temperature drift.
This temperature drift causes a shift in the irradiation position of the electron beam, and it is necessary to reduce the gap to prevent errors. When temperature drift occurs, the focus position shifts and blurring occurs in the optical axis.
This causes such problems as poor contrast in the contours of CT images and inaccurate material density.
As the second, a geometric error occurs when the position of the rotatable stage deviates from the ideal state. The third, a movement error can also occur if the rotatable stage fails to turn in its ideal rotation. Besides, geometric errors can cause dimensional shifts, and motion errors can compromise the accuracy of the 3D model.
The fourth, there are two more things to note about the detection system. The one is the blur of the projected image due to the deviation of posture and position. Another is that the image becomes unclear due to the sensitivity difference and noise characteristics between multiple X-ray detectors.
Such errors are caused by physical factors of the X-ray CT itself, as referred to above. Therefore, to prevent the occurrence of errors, it is absolutely important how well the calibration is performed. Accurate data can be obtained if the X-ray intensity emitted from the X-ray focal point is stable and the sensitivity difference and noise characteristics of the X-ray detector can be grasped in advance.
Of course, the axis calibration is necessary for the X-ray generator, the sample on the rotatable stage, and the axis calibration. And the fifth is sample physical characteristics. This is caused by the characteristics of the sample.
The other three occur during measurement methods and data processing. In case the sample is metal, a "metal artifact" will occur, in fact. These "artifacts" refer to images that are not actual objects but are generated secondary to the imaging conditions.
Metal artifacts occur when metals with high absorption rates are interspersed within substances with low X-ray absorption rates. This is because lower energy X-rays are absorbed, which can be mitigated by performing beam hardening correction.
In addition, when the X-ray absorption rate of the subject is low and no signal is output from a specific X-ray detector, a "ring artifact" occurs. When a signal from a specific direction is not output, a "shower-like artifact" occurs.
When a signal from a specific direction is not output by a specific X-ray detector, a "streak-like artifact" occurs. 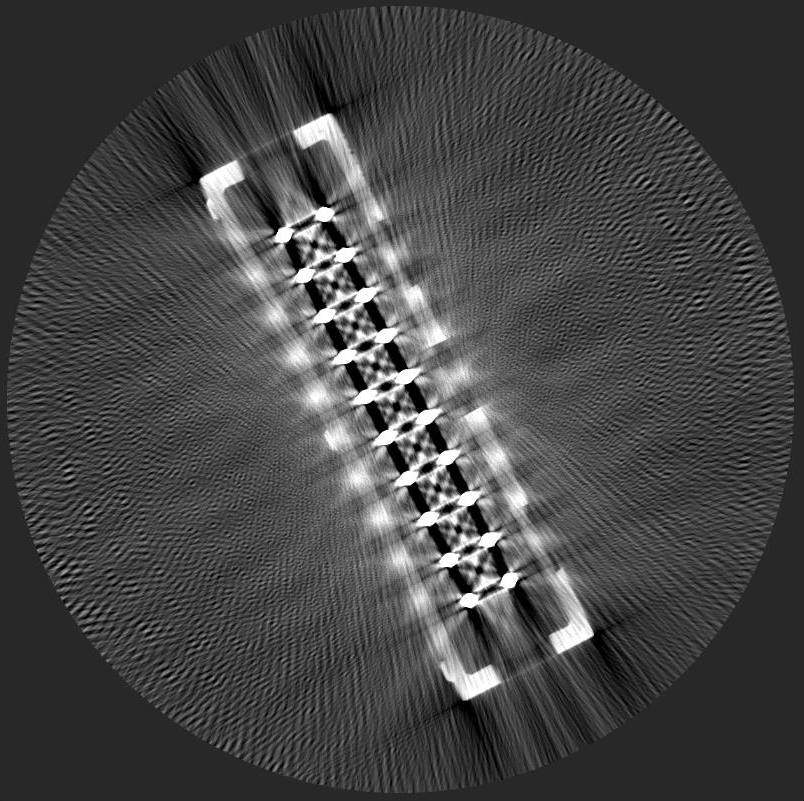 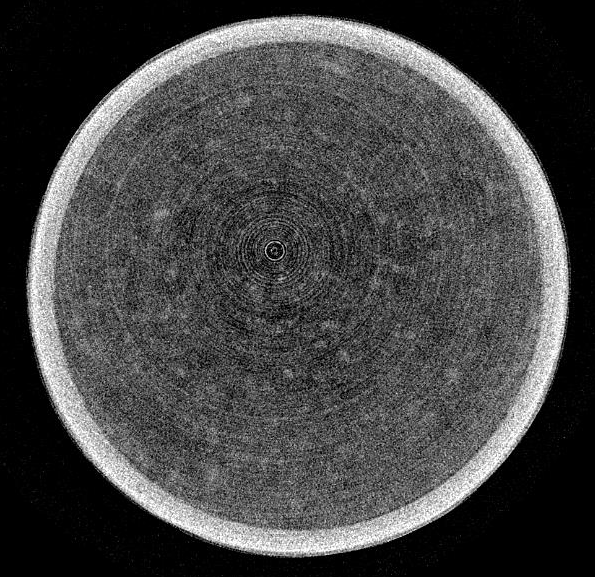 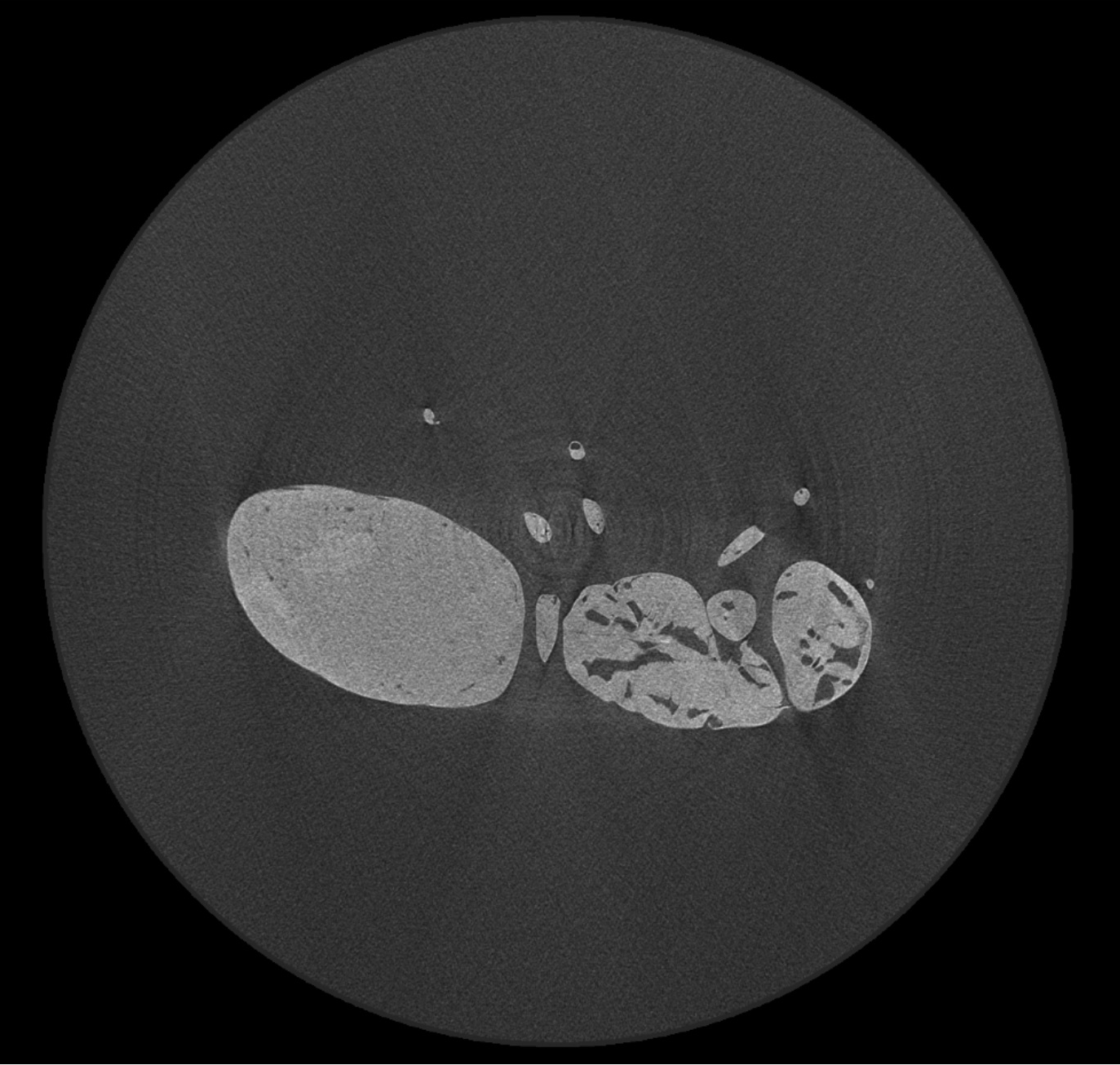 Furthermore, there are some different parts in reducing errors and noise depending on the scanning mode. The normal scanning mode is popularly adopted in which the respective centers of the X-ray generator, the object on the rotatable stage, and the X-ray detector are arranged on a straight line.
In order to obtain a large image in normal scan, however, it is necessary to increase the area of the X-ray detector. Therefore, there is a case called "offset scan" that obtains a large image by shifting the center from the axis without changing the size of the X-ray detector.
In the case, the center of rotation and the optical axis are misaligned, so an accurate image cannot be obtained unless correction is performed during the image composition. 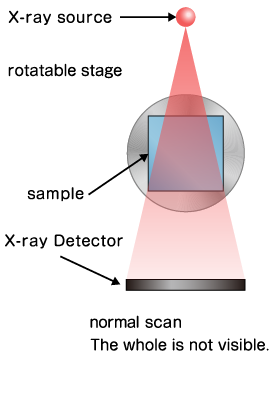 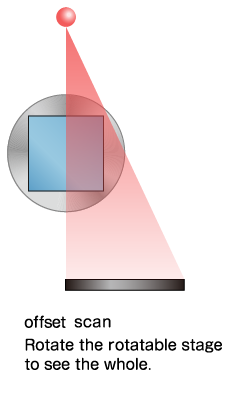 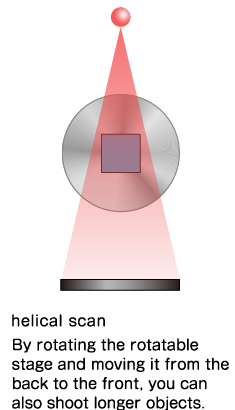 One more, there is a scanning mode called as helical scan that takes images of a three-dimensional structure of a sample in a short time by moving the position of the rotatable stage back and forth during imaging.
In this case, the position of the fault changes in coincidence with the rotation of the rotatable stage, so care must be taken when constructing the image.
Next, we describe about "information obtained from X-ray CT images and how to view it" in X-ray non-destructive inspection series (2).

The new design of the slim microfocus X-ray NDT system can be used to inspect any sample.
CT option available