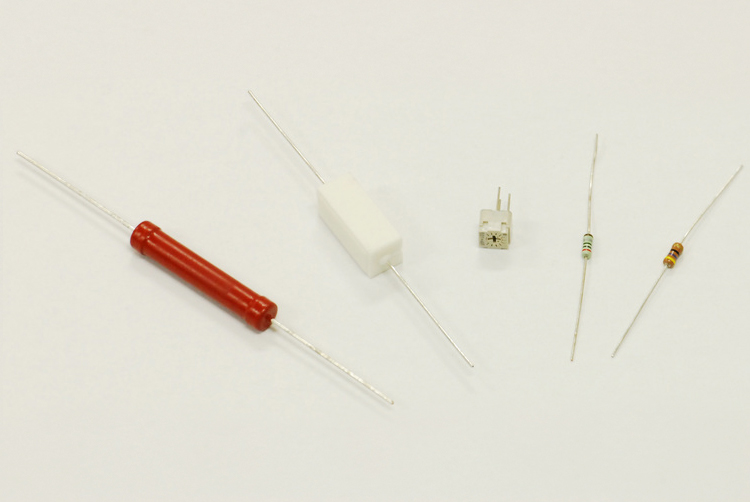 Carbon film resistors, commonly called "carbon resistors," use a carbon-based baked film. They have the lowest cost and are available in a wide range of resistance values. Since their temperature coefficient is not very good, they are not used in applications requiring high accuracy. Carbon film resistors have become the mainstream type for general resistors due to their low cost and performance aspect.

Solid resistors use a baked kneaded mixture of a carbon-based resistive material and ceramic, etc., as the resistive element. These resistors have the feature of being robust and capable of being used in harsh conditions. Ultra-small resistors such as 1/16 W types can be produced, and in addition, a wide range of resistance values can be covered. However, from the cost aspect and overall characteristics aspect, carbon film resistors are better.

Metal oxide film resistors use a film in which metal oxides are mixed into the resistive element. They are used in relatively intermediate power applications of around several watts, and are inexpensive. The temperature characteristics are inferior to metal film resistors at about ±350 ppm/°C, which is not very good.

A resistor network is a type of composite component consisting of several resistors in a single package. It has the merits of reducing the number of components, saving labor, having high density, etc.

A variable-resistance resistor (trimmer) which is intended to be adjusted in the factory. It can be adjusted by turning with an adjustment screwdriver.