Do you know that there was a "switch" until about the 1980s in the case that you buy home appliances, especially when you connect lighting equipment to an outlet in Japan? This switch was for switching the frequency of the alternating current. The frequency of the exchange is different in East Japan and West Japan. Recently, many people don't know because it has become to be switched automatically. Since 50 Hz in East Japan and 60 Hz in West Japan are used, it isn't possible to transmit and receive power with each other as it is.

Specifically, Chubu Electric Power is transmitting at 60 Hz, but Tokyo Electric Power is transmitting at 50 Hz. If you are going to exchange power between these power companies, you need to convert the frequency. Currently, the Shin-Shinano frequency conversion facility, Sakuma frequency conversion facility, and Higashi-Shimizu electric power substation are connected at three locations where substation facilities are installed. This is also a kind of grid connection.

Naturally, old appliances cannot be connected as they are, and when moving from East Japan to West Japan or vice versa, it is necessary to switch the frequency of alternating current by a switch. However, as this is bothersome, as we mentioned earlier, recent home appliances are switched automatically. A grid connection refers to a state in which each system with different types of power supply such as voltage, AC, DC, etc., is operated in parallel for the purpose of interchange of power between two or more power systems. It works on different power transmission lines, so when connecting it, you need some kind of trick.

In the familiar example, some homes have residential photovoltaic systems installed. In this case, many households will charge the battery while using the generated electricity during the daytime and then sell surplus power to the power company. Conversely, if it becomes impossible to generate electricity at night, the lighting and electronic devices are operated by the storage battery and the power supply from the power company. While solar panels and power cells are basically DC power sources, power companies' systems are AC power sources, so they are different systems. 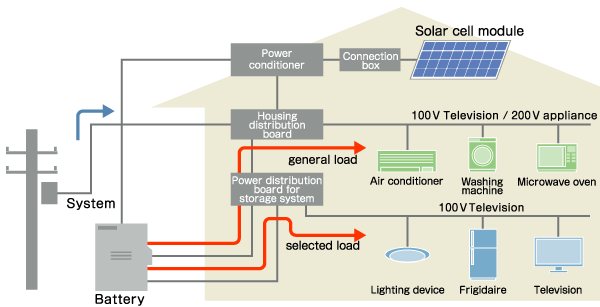 Taking out only the power generation part of the upper figure and making it on a large scale, it becomes the connection from the Mega Solar power plant to the power transmission line owned by the power company. At Mega Solar power plant, the solar inverter (power inverter) will charge the battery (although it may not), then adjust the output to a certain level and send the electricity to the grid. In this case, it is necessary to convert DC to AC at the same time as adjusting the voltage.

In the case of grid interconnection, voltage transformation, and DC/AC conversion is required. The technology used for the bi-directional power supply introduced in the last column will be useful. In other words, the grid of the transmission line of the power company comes by alternating current. It is at a voltage of 100 V or 200 V, and household electronics are designed to operate at this voltage. On the other hand, solar cell modules and storage batteries come in direct current, but they cannot be used at home as they are. It is necessary to boost it to 100 V or 200 V and then make it AC. This is just what the bi-directional power supply does.

So, what is the important part of grid connection? Let's take a residential photovoltaic system as an example.

A "Solar inverter" is required to connect to the power system of a power company. This is a kind of inverter, and it "sucks" the direct current generated by the solar cell module, adjusts the phase and voltage to an alternating current suitable for the system converts it into alternating current, and "pours" it into the system. It consists of this inverter (DC/AC conversion device) and a grid connection protection device.

The inverter is equipped with a device with maximum power point tracking (MPPT), harmonic suppression, and reverse flow control. The inverter changes DC power to the same level of power as grid power and supplies power to grid-connected home appliances. For surplus power, reverse power is sent to the grid side.

On the other hand, the linkage protection device is necessary to connect the power supply to a stable state. Solar power generation depends on the weather. If a certain amount of power cannot be supplied due to unseasonable weather or a system problem, or if the conditions for power generation are too good to supply a large amount of electricity, these will appear as abnormal voltage fluctuations. Since this voltage fluctuation will be a load on the grid, in the case of grid interconnection, there are installed an automatic voltage regulator that regulates the voltage and the stabilization of the amount of power supply by sandwiching the storage battery. In some cases, if there is a problem on the grid side, it also has a function to minimize damage to the photovoltaic system. In other cases, it is also necessary to have a mechanism to perform "disconnection" to separate from the grid connection. These are the roles played by the grid connection protector. The solar inverter incorporates not only conversion from direct current to alternating current but also the mechanism necessary for the stabilization of these power supplies. 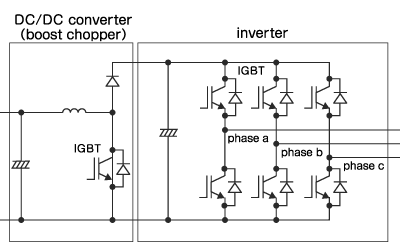 AC is converted to DC by an AC/DC converter consisting of a transformer, a rectifier circuit, and a smoothing circuit and is further converted to a DC voltage required by a DC/DC converter. Since semiconductors and circuits built into electronic devices require different voltages, connecting different voltage sources may cause an overcurrent to burn the circuit. Conversely, if the required voltage is higher than the supply voltage, the voltage may become unstable, and the electronic device may be destroyed. In this case, the breaker operates in the home, and both the circuit of the electronic device and the power supply system are protected by forcibly disconnecting from the grid connection.

In addition, grid connection requires "conversion of AC and DC" and "conversion of voltage." Since the 1990s, the development of power semiconductors, commonly known as "power semiconductors," has been underway to do these efficiently. Until now, manufacturers have made circuits by combining various parts, but these have been replaced by semiconductors that can handle high voltages and large currents. In particular, a large amount of power is used to generate heat, which may cause a failure. Therefore, it is necessary to reduce the power loss of the power semiconductor itself, which is the cause of heat generation, or to efficiently dissipate the generated heat. The development of materials such as silicon carbide (SiC) and gallium nitride (GaN) has led to higher performance.