An actuator is a mechanical element that is made up of mechanical and electrical circuits that convert input energy or electrical signals that are output from a computer into physical motion. This is called active operation or active drive.

The Matsusada Precision piezo actuator is a product that applies the characteristics of piezoelectric elements (extremely minute changes in elongation in the nanometer range, due to changes in applied voltage). 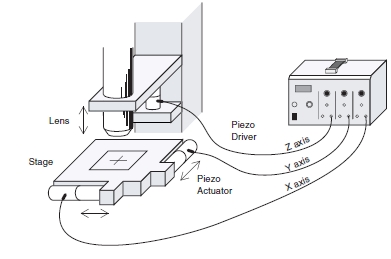 Piezo actuators do not have mechanical motion mechanisms such as gears. The elongation is based merely on the distortion of solid physical properties, and generally, there is no wear or deterioration. The results of durability testing showed no change even after several million cycles of elongation.

Piezo actuators are an optimal choice for positioning that requires micron and submicron precision. They can withstand loads of up to 5 tons, and can be used for positioning with ultra-high precision at a range of several hundred microns.

In many cases, the speed of positioning movement has a very important meaning. Piezo actuators are positioning elements with faster responsiveness than any other actuator. The elongation speed depends on the speed of sound in the ceramic material, and acceleration that is several thousand times the gravitational acceleration is possible.

The biggest disadvantage of piezo actuators is hysteresis. In other words, the elongation of a piezo actuator is not strictly proportional to the strength of the electric field. The voltage/stroke trajectory is represented as a nonlinear "hysteresis curve". When voltage is applied, the degree of elongation of the element depends on the size of the voltage. The maximum width of the hysteresis curve reaches 15% of the maximum stroke. In order to compensate for this, it is necessary to provide a highly accurate position detection mechanism (such as a strain gauge) externally. 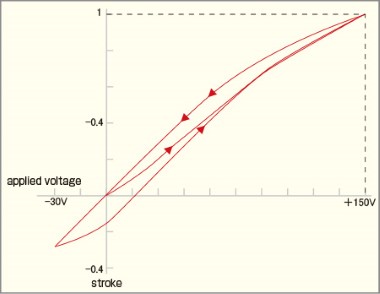 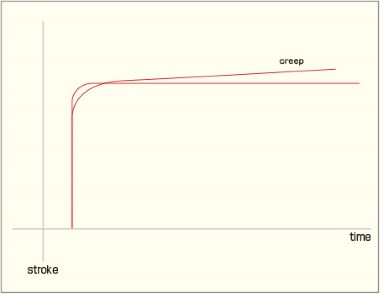 Piezo actuators have a structurally robust design. However, the ceramic material is very fragile, and should be handled with care during installation.

Stacked piezo actuators can apply stress only in the axial direction.

For models with taps at the tip, care should be taken to avoid applying a rotational moment to the piezo body.

Stacked piezo actuators are made up of several layers. It is possible for these layers to become peeled off.

When installing an actuator between two opposing parallel planes, be sure to install the unit so that it is vertical to each face.

If the two surfaces are not parallel, use an actuator with an optional ball on the tip.

If the actuator has preliminary load functionality, it also covers slight deviations in the tension/installation state. 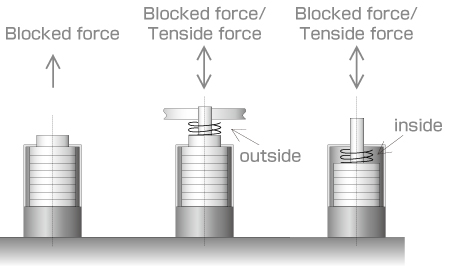