An ion pump is a type of vacuum pump used to create an ultra-high vacuum. They are also called sputter ion pumps or noble pumps. There are several types of vacuum pumps, including ion pumps, as follows.

The ion pump consists of a powerful magnet, an anode (anode array) with a honeycomb structure, and a cathode (cathode) made of titanium arranged to sandwich the anode. Therefore, it is characterized by the fact that it has no mechanical moving parts like a rotary pump.

When a cold cathode discharge occurs in a magnetic field, the electrons emitted from the electrodes move back and forth between the cathodes in a spiral motion due to the action of the magnetic field.
When the electrons collide with gas molecules, the gas molecules are ionized and become ions. When these ions collide with the cathode, they sputter (knock out) the titanium atoms on the surface of the cathode and embed them in the cathode.
In addition, the sputtered titanium atoms form a clean titanium film, called a getter film, on the anode, cathode, and inner walls of the pump. Since the sputtered titanium atoms are chemically active, they adsorb surrounding gas molecules as they form the film.
Gases such as hydrogen, oxygen, nitrogen, and carbon monoxide, as well as inert gases such as helium, are ionized and thus embedded in the cathode or adsorbed by the titanium atoms. As a result, the number of gas molecules in the surrounding environment decreases. In this way, the ion pump creates a vacuum state.

Rather than using a mechanical mechanism to pump air, as in the case of a centrifugal pump that pumps water, a vacuum is created by chemically reacting and consuming the air present.
If you imagine an elementary school science experiment in which a candle is burned in a bottle lying on the surface of the water, water is sucked up in proportion to the oxygen consumed, it will be easier to imagine how the ion pump works. When there is no more gas, the electrical resistance between the anode and cathode rises. This causes the current to stop, and the completion of pumping can be confirmed.
The ion pump is characterized by its ability to achieve a high degree of vacuum regardless of the type of gas. For this reason, they are used in transmission electron microscopes, electron beam lithography equipment, accelerators, and semiconductor manufacturing equipment.

The advantages and disadvantages of ion pumps are as follows.

One of the major advantages of ion pumps is that they can achieve a high vacuum without mechanical vibration or noise because of their simple mechanism of applying a voltage to electrodes in a magnetic field. For this reason, they are widely used as vacuum pumps for electron microscopes and semiconductor manufacturing equipment, which require both high vacuum and fine control.
Ion pumps themselves are not very large, and even the largest ones are usually small enough to fit on a desk.
Since the power consumption drops when there is no more gas that can be exhausted, and there is no backflow of oil or other contaminants to contaminate the area being exhausted even if the pump should stop, it is suitable for unattended operation for long periods of time, and is also widely used as a vacuum pump to maintain a vacuum.
On the other hand, one disadvantage is that it is difficult to pump at high flow rates. In most cases, the start-up pressure of ion pumps is around 1 Pa. Therefore, in order to obtain an ultra-high vacuum, it is common to create a high vacuum state with another pump in advance, and then use the ion pump to perform the final pumping and maintenance.
In addition, if impurities are adsorbed inside the pump, they will interfere with the pumping, so baking must be performed beforehand to remove the impurities. In addition, the titanium of the cathode is sputtered and deposited on the inner walls of the pump and other parts, so it has a life span. The equipment needs to be replaced at the appropriate time. Another disadvantage of ion pumps is that they require high voltage. Commercially available ion pumps are made to operate at 3kV, 5kV, or 7kV. In addition, power supplies with currents and capacities ranging from tens of watts to hundreds of watts are used, depending on the pumping speed and capacity.

Matsusada Precision has a lineup of modular power supplies and dedicated power supplies for ion pump operation. These power supplies not only supply power to the ion pump, but can also monitor vacuum conditions by accurately detecting minute changes in current. 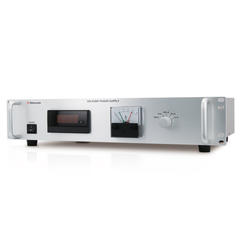 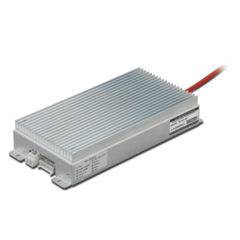 Embedded module high-power up to 250W 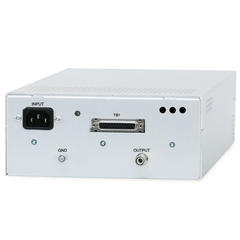