Most of X-ray images are monochromatic. The shading of the color is mainly related to the amount of X-ray penetration.

X-rays are electromagnetic waves with very short wavelengths. Therefore, they can pass between the atoms that make up the substance. However, not all X-rays penetrate an object without being changed. Some X-rays are attenuated as they pass through. A variety of interactions (photoelectric effect, characteristic X-ray radiation, inelastic scattering, etc.) occur when X-rays hit the electrons circling around a nucleus. X-rays for which such phenomena do not occur and pass straight through are transmission X-rays. The areas on an image where these X-rays are present appear bright and whiter as the dose increases. On the other hand, attenuated areas appear darker and black.

Generally, the strength of transmission X-rays is determined by the following factors.

1. More X-rays are blocked as atomic number and density increase.

Changes in X-ray image with different materials of the same thickness
* Atomic numbers are shown in parentheses.

3. X-ray intensity is determined by tube voltage (V) and tube current (A).

Increasing the tube voltage shortens the wavelength of X-rays and makes transmission easier. The value of the tube voltage required for transmission will differ depending on the material of the sample, for example, Al (atomic number 13) or Fe (atomic number 26). Increasing the tube current increases the dose and intensity of X-rays generated, but since the wavelength does not change, objects that are not penetrated are not visible, no matter how much the tube current is increased. Determining the optimal settings for these two conditions (tube voltage and tube current) according to the object you want to see is the key to taking clear X-ray images.

X-ray observation is easy to understand by thinking of a shadow picture. The figure below is a schematic diagram of a basic X-ray imaging system.

Accordingly, as the workpiece is getting closer to the X-ray generator while maintaining the distance of [l2], the geometric magnification becomes higher. In other words, when the workpiece is getting away from the X-ray generator, the geometric magnification becomes lower, which is suitable for the wide-field observation images. 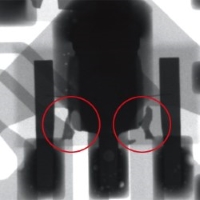 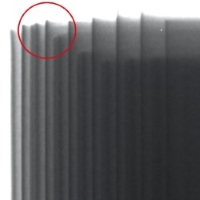 Gap of jelly-roll in rechangeable battery

CT analysis of a capacitor 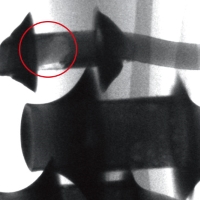 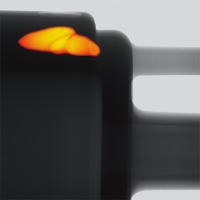 Void in a resin molded product 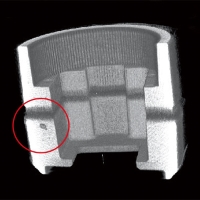 CT analysis of blowholes in a die-casting