We will introduce a method to analyze what kind of elements are contained in a sample using a Scanning Electron Microscope (SEM) and an Electron Probe Micro Analyzer (EPMA). Both devices can obtain information derived from the sample by irradiating the sample with an electron beam and analyzing the signal returned from the sample. Of course, SEM is not a device for elemental analysis, so installing an analyzer makes it possible to analyze samples.

One of the methods to investigate what kind of substances (elements) are contained in the sample is the method using characteristic X-rays. In the analysis by SEM and EPMA, the elements in the sample are discriminated by using this characteristic X-ray. Atoms have the property of emitting electromagnetic waves of a specific wavelength when electrons excited by external energy return to their original orbits, or when electrons in higher orbits transition due to orbits in which electrons have escaped. Assuming that the energy given from the outside is hν and the energy released is hν', the result is as shown in the following figure.

The wavelength of emitted electromagnetic wave is mainly in the X-ray region. The elements contained in the sample can be identified by irradiating the sample with an electron beam using SEM or EPMA, and at what wavelength the emitted X-ray spectrum shows the emission line.

We will explain in a little more detail, including the structure of the atoms. As we learned in high school physics, atoms are made up of nuclei and electrons. And the orbits of electrons are named K-shell, L-shell, M-shell, N-shell, etc. from the inside, and to what orbits the electrons are buried depends on the element and its state. For example, the iron atom has an atomic number of 26, so there are 26 electrons including the N-shell. 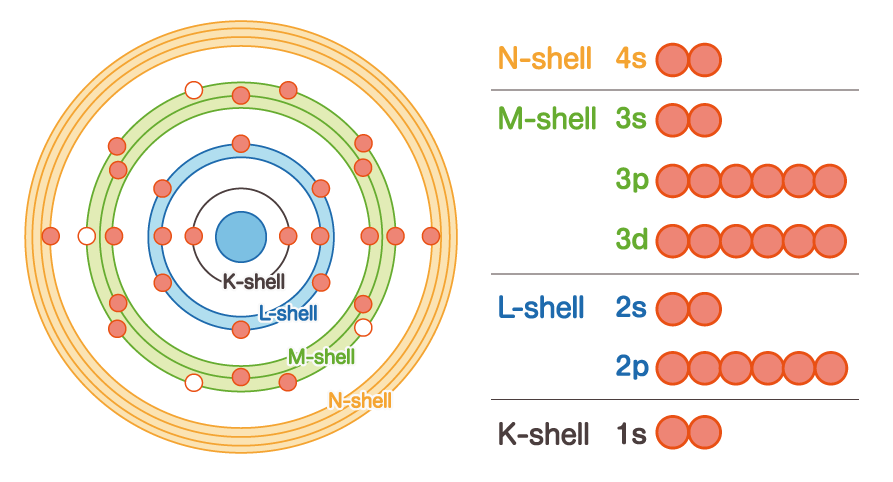 Schematic Diagram of the Electron Orbit of an Iron Atom

By the way, the electrons in the atom will jump out of their original orbits when strong energy is given from the outside. This is called excitation. To excite an electron, it requires more energy from the inner orbit than from the outer orbit. On the other hand, the electrons come down from a higher orbit to the vacant place due to the excitation and jumping out of the electrons. At this time, the energy of the difference between the high orbit and the low orbit at the transition location is emitted as an electromagnetic wave. Names such as Kα line, Kβ line, Lα line, and Lc line are determined depending on which orbit the transition is from to which orbit. 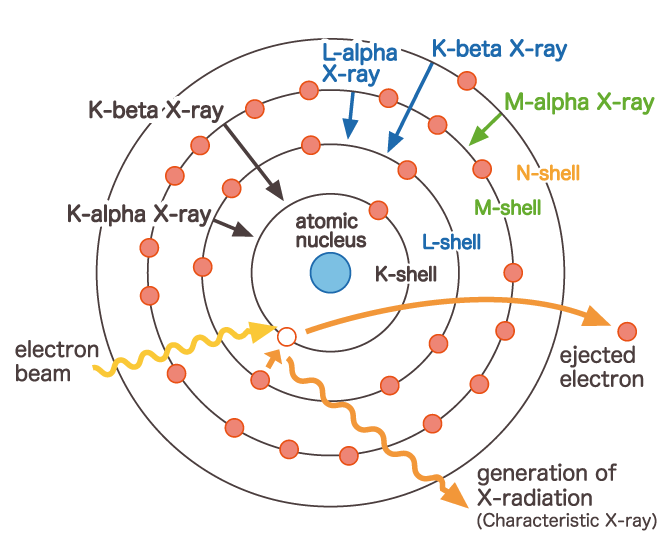 And the energy of the emitted electromagnetic wave is uniquely determined by which element and which orbit it transitioned from. Taking the energy (Kα) emitted when an electron transitions from the L-shell to the K-shell as an example, we can see that each element has its own energy value. Therefore, the wavelength of the emitted electromagnetic wave is also fixed. This X-ray is called a characteristic X-ray. By the way, when X-rays are used to excite electrons, the characteristic X-rays that are generated are called "fluorescent X-rays". In other words, when a sample is irradiated with an electron beam using SEM or EPMA, the electrons of the atoms contained in the sample are excited, and the electrons transition from a high orbit to a vacant place, emitting X-rays according to the element. By observing and analyzing this X-ray, it is possible to obtain information specific to the elements contained in the sample.

There are two types of elemental analysis methods, each of which has its strengths and weaknesses. WDS has a high energy resolution (wavelength resolution) of about 10 eV, and has the advantage of being less affected by scattered X-rays and having less background noise. In addition, microanalysis of several ppm is possible. But WDS has a narrow wavelength range that can be measured at one time and requires mechanical control to switch the spectral crystal according to the measurement wavelength, so it is not possible to identify multiple elements at once. In addition, high-precision control is required for wavelength spectroscopy using spectroscopic crystals, and the equipment tends to be large. Disadvantages include larger equipment and longer measurement times.

On the other hand, EDS detects with one semiconductor and requires few moving parts for measurement, so it is compact and can be measured in a short time. Another advantage is that you can check many elements at once. However, although the performance has improved in recent years, the energy resolution is only about 130 eV (in the case of Mn Kα), and the background noise tends to be large. In addition, it cannot be detected unless it contains at least 10 to 20 ppm. Therefore, it is necessary to use them properly.

By the way, EDS, which requires a small device, is mainly used in SEM. On the other hand, WDS is used in EPMA because the electron beam energy device becomes large. Of course, it is also possible to use EDS with EPMA. Compared to SEM, EPMA can be said to focus on elemental analysis.

In this spectrum, iron (Fe) Kα, Kβ, and Lα are visible. You can also see that the oxygen (O) Kα is emitted. You can see that the energy (wavelength) of iron and oxygen is different for the same Kα. And you can judge that the height of the peak (more accurately, the area) indicates the concentration of the element. Therefore, the spectrum shows that the substance contains a large amount of iron and oxygen, and if this sample is an unknown sample, we can conclude that it is iron oxide. It can also be seen that this sample contains trace amounts of manganese (Mn) and silicon (Si) as impurities. In this way, it is also possible to identify how much impurities are mixed.

When the sample is irradiated with an electron beam by SEM or EPMA, there are some that are emitted in addition to the characteristic X-ray. One is an electron, which includes reflection electrons, secondary electrons, and Auger electrons. The other is electromagnetic waves emitted in the wavelength range of visible light. Now, let's introduce two other analysis methods using SEM and EPMA.

In the case of the cathodoluminescence technique using SEM, other signals (secondary electrons, reflection electrons, X-rays, etc.) generated by electron beams can be acquired at the same time, so it has the feature that physical properties can be evaluated in a complex manner.

The cathodoluminescence technique can be used to investigate the crystal structure of a sample and the concentration of impurities. The target is mainly semiconductors, derivatives and ceramics, and it is used for material analysis such as defects in crystal structure. It is also used to measure impurities in oxide and derivative materials. 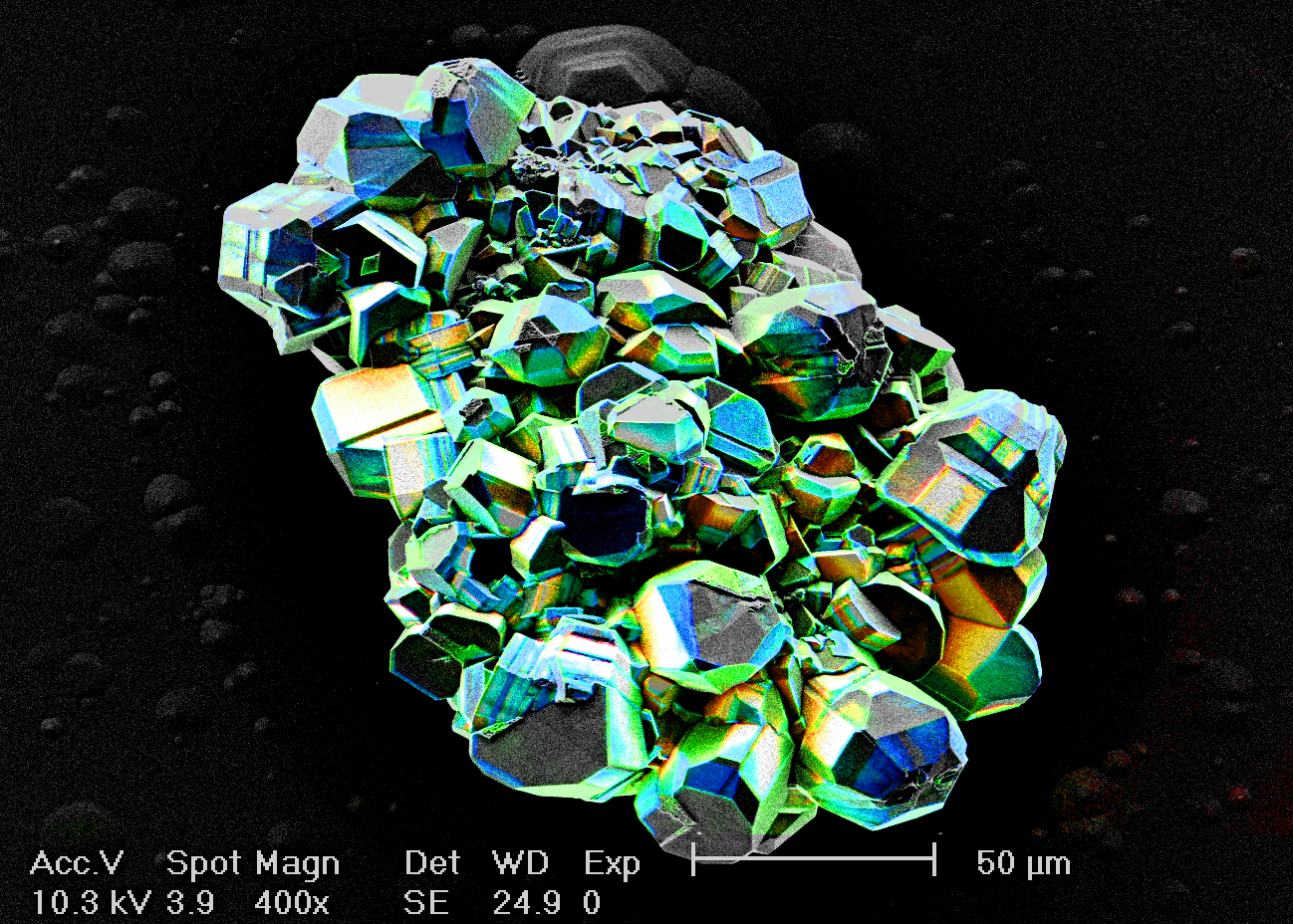 This method utilizes reflected electrons that are diffracted on the sample surface. This analyzes the orientation of the crystal. When the sample is tilted 60 to 70 degrees with respect to the incident angle of the electron beam, the crystal structure of the sample is affected and a Kikuchi figure (Kikuchi pattern) is generated. This pattern is made up of white and black lines called Kikuchi lines that are generated multiple times by diffraction on the crystal plane. 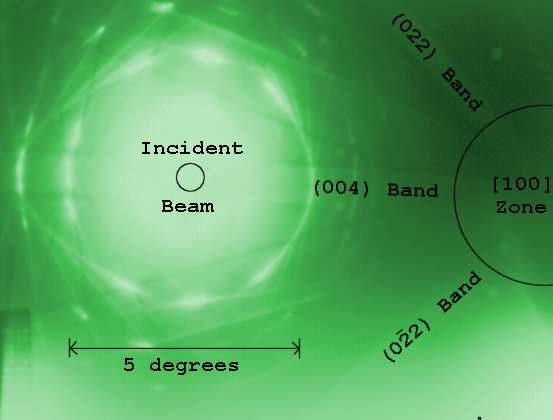 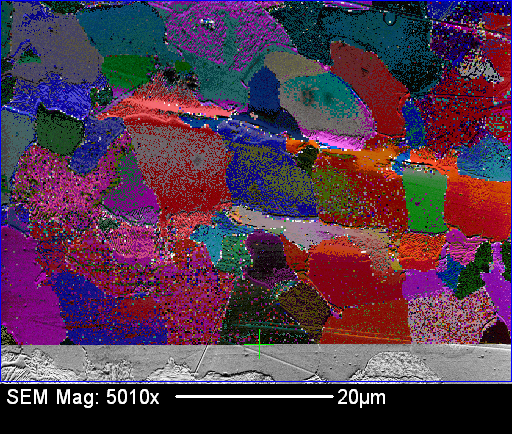