Types and Principles of Lenses in Electron Microscopes 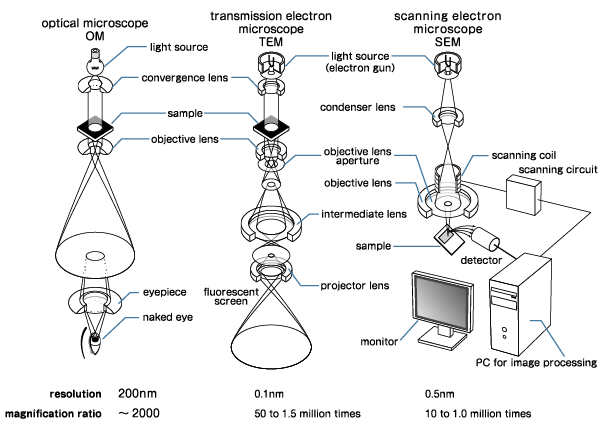 Of these, the lenses correspond to convergence lenses, objective lenses, intermediate lenses, eyepieces, and projector lenses. Compared to an optical microscope, the structure of the lens itself is different even if the same name "lens" is used because an electron beam is used as the light source. 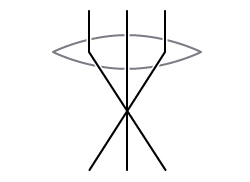 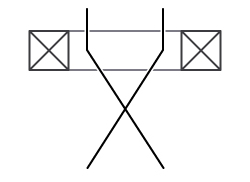 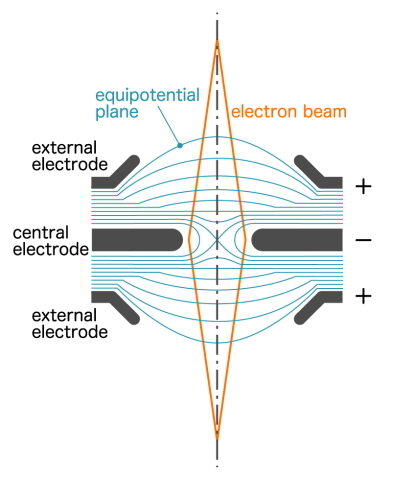 The figure is a cross section and the actual shape should be axisymmetric (rotational symmetry). This type of lens has the advantage of operating even if the power supply voltage is somewhat unstable. However, there are problems such as large aberrations and the inability to shorten the focal length for high-energy electrons, so we have replaced the "electromagnetic lens" introduced below except for the part that accelerates and decelerates the electrons.

On the other hand, the "electromagnetic lens (magnetic field lens)" uses a magnetic field instead of an equipotential plane. According to Fleming's law, when an electron is incident on an existing magnetic field, a force is applied in the direction perpendicular to the incident direction and the magnetic field. The Lorentz force bends the path of electrons. 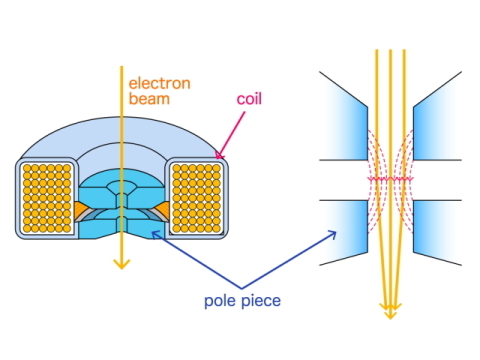 Basically, it is an electromagnet that uses a coil. But since the magnetic field strength is weak (the density of magnetic field lines is low), surround a coil with a material such as iron and create a magnetic pole that protrudes toward the center of the hole. This protruding magnetic pole is called a "pole piece", and the electron beam passes through the area surrounded by this pole piece.

Since the degree of focusing is affected by the strength of the magnetic field, it is essential that the power supply voltage is stable.

Electromagnetic lenses are less affected by aberrations than electrostatic lenses, but they are still larger than optical lenses. Therefore, when using it, it is necessary to use only the electrons that have passed through the center of the lens as much as possible. The "objective lens diaphragm" placed under the lens plays this role. This cuts electrons from the periphery of the lens, which has large aberrations.

Positional Relationship between Sample and Lens 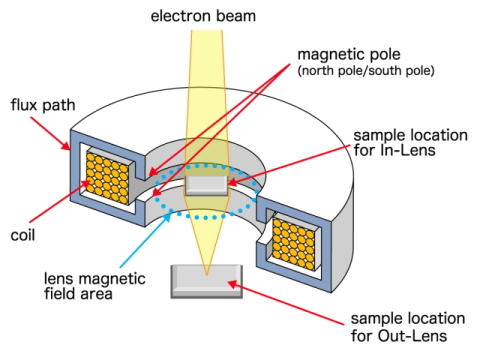 Therefore, it is necessary to use the out-lens method when the sample is large or affected by the magnetic field. And you use the in-lens method when the sample is small and not affected by the magnetic field. However, a "semi-in lens (snorkel) method" objective lens was developed to eliminate this drawback of the in-lens as much as possible. 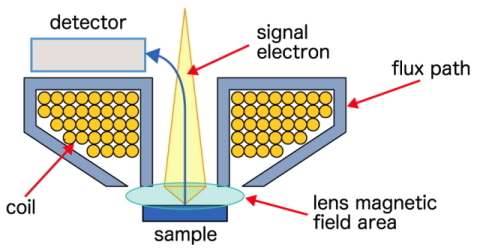 Since the sample is placed under the objective lens, it looks like an out-lens type, but the focal length can be shortened by devising the shape of the pole piece, so it is possible to obtain a resolution close to that of the in-lens method. The semi-in-lens method enables high-resolution observation of even large samples. 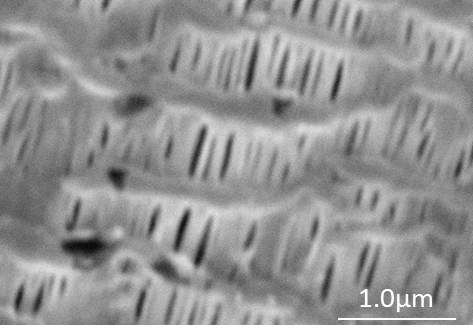 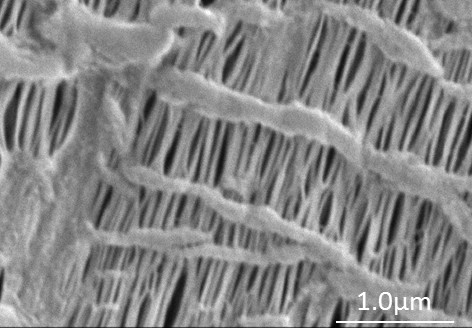 This shortcoming is not inevitable. Our "Precision SEM3500 and Precision SEM5600" solves this problem. The optical system of our SEM is as shown in the above figure. In addition to the out lens (top lens), the objective lens (bottom lens, which looks like an inverted semi-in lens) is also placed on the lower side. With this bottom lens, you can improve the resolution by moving the detector closer, and you can use it with a short focal length because the lens is under the sample. With the bottom lens, it is possible to increase the resolution.